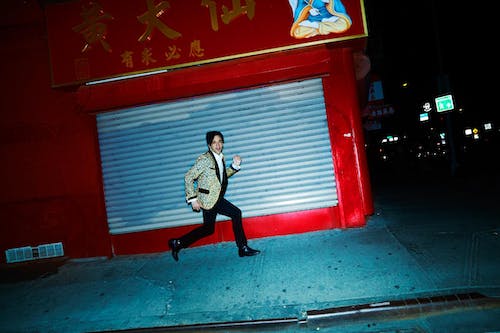 In just over a decade, Jonathan Toubin — rock and soul 45 DJ and proprietor of the New York Night Train brand party production enterprise — has charted a career that is culturally and commercially unparalleled – reigning as America’s most popular and prolific soul party DJ and 45rpm vinyl DJ. With a visionary take on nightlife and an unusual perspective on rare 7-inch vinyl and how it is juxtaposed, Toubin sells out clubs and performs at major rock concerts and festivals around the world. Though known for the burning immediacy of his "maximum rock and soul" sets at the weekly Shakin’ All Over Under Sideways Down dance, his instructional Land of 1000 Dances spectacle, his elaborate multi-media "Happenings", and other trademark parties, Toubin’s take on 1960s soul music, the Soul Clap and Dance-Off, has left the biggest footprint on contemporary urban nightlife and put Mr. T on the map as soul man.

Working well over 2000 gigs in eleven years, Jonathan Toubin has managed to keep one spectator brogue in the counter-culture from which he emerged (punk bars, DIY basements, loft parties, art galleries, rock venues, and shady afterhours spots) while crossing over to dance clubs, prestigious festivals (Bonnaroo, All Tomorrow’s Parties, End of The Road, etc each multiple times) boutique hotels, museums, ivy league colleges, fashion parties, arena pop/rock shows, raves, and even headlining his second gig at Lincoln Center. He’s also the only DJ given an entire official night at South By Southwest. Its become the festival’s official closing party and he’s done it seven of the last eight years! Toubin continues to play the world’s most infamous dives and rock clubs while garnering press in highbrow publications and receiving nominations for nightlife awards from the fancier side of culture in the process. He also the first 45 DJ with mixes available on Burger Records and the first living DJ with compilations of his work on the legendary Norton Records – with the sold-out LPs Souvenirs of the Soul Clap, Vol 1, 2, 3, 4, and 5.

Soul Clap and Dance-Off at Lincoln Center with special guest Young JessieJonathan Toubin debuted the Soul Clap and Dance-Off in March 2007 as a monthly outlet to play his growing collection of soul 45s to a small north Brooklyn underground art/rock social community in the spirit of 1990s indie/punk scene parties. He added a brief dance-contest to the mix to make the event more interesting. As this humble makeshift neighborhood underdog evolved into an institution, Mr. T employed the party’s popularity as a weapon against Top 40 nights, 80s/90s nights, and other mediocre contemporary night culture of the time – offering an alternative in the possibility of dancing to exciting music most of us have never heard before with the unparalleled sound of the original recordings. The epic size, frequency, and geographical breadth of the Soul Clap has been a seed for a new wave of soul dance culture among indie rockers, punks, and hipsters (for lack of a better term. Contemporary underground culture-consuming urbanites?) first in Brooklyn, next in Manhattan, and, by 2009, around the world – inspiring slews of imitators and developing new nightlife economies everywhere from Portland, ME to Portland, OR, from Berlin to Buenos Aires, from Tasmania to Tel Aviv.

When Jonathan Toubin began regularly DJing punk and garage rock weekly at the Lower East Side’s infamous Motor City Bar in October 2006, he was a small record label-owner and a musician finishing up his graduate thesis and paying rent as a freelance writer. Within a year, Mr. Toubin had become a full-time professional DJ/party promoter – working nightly around New York mixing in eclectic genres (psych, punk, reggae, etc.) with the garage, rockabilly, doo wop, r&b, and soul sounds that he’s best known for today. Casting aside mp3s, CDs, and eventually LPs once he began hitting dance spots, he stepped up to the challenge of spinning exclusively the biggest, baddest, and most challenging musical medium, the 45rpm vinyl record. Switching to an all 45 format not only meant spending all of his time and hard-earned cash obtaining his favorite records and deep new discoveries, but also taking a step back in his repertoire for a spell. The gamble, the expense, and the hard work rapidly paid off – New York Night Train’s nightly 7-inch ragers quickly became the stuff of legend from Brooklyn to the Bowery.

Playing only the original vinyl (no repros, comps, etc) for dancers instead of collectors, cutting $5 commoners with $500 rarities with strategic pitching, sequencing, EQ-ing, and transitioning, Jonathan Toubin distinguishes his sets from typical 45 DJs by focusing on the dance floor, the juxtaposition of beats, the strategic mix of selections, showmanship, and energy. In the process he also stood in contrast to the hit-players and digital jocks on the other end of culture by playing uncommon music on all-original vinyl with playful live improvisation. Years of nightly gigging in a variety of settings offered NYNT’s conductor a huge advantage over his peers in that his labor also served as an infinite laboratory regarding the subtleties of how, without spinning obvious or even familiar material, to make a variety of cultures and subcultures dance together – uniting even the squarest weekend dance floors under the power of his live mixes of real deal records. Jonathan Toubin’s primary goal remains offering a supreme unforgettable one-of-a-kind experience to nightlife denizens everywhere.

December 7, 2011, while Toubin was on tour in Portland, OR, a runaway cab crashed through his first-floor hotel room – landing on top of him. In critical condition and sedated in the ICU for over five weeks, and in full-time intensive rehabilitation for months, the soul proprietor’s friends and fans around the United States took action – throwing dozens of benefits in his honor everywhere from New York to Los Angeles and Detroit to New Orleans – featuring everyone from Yeah Yeah Yeahs to Ty Segall to Maragaret Cho. Many operations and months of physical therapy later, New York Night Train’s conductor proved that he would not let 26 major injuries bring him down – making his public debut as the surprise DJ at Jack White’s Webster Hall show April 27 (less than five months after the accident that doctors predicted would take at least a year to recover from enough to function on a basic level).

Putting all the obstacles behind him, Jonathan Toubin continues to move forward and up the ante for his DJing and parties, improving his records, DJing, and crowds each year. 2016 concluded with the release of his 5th Norton Records compilation LP, “Souvenirs of the Soul Clap, Vol. 5” and 2017 begins with a huge party March 3 celebrating the 10th Anniversary of the NY Night Train Soul Clap and Dance-Off, where the DJ leaves his vinyl at home and shines the spotlight on the artists who originally recorded them – Irma Thomas, Archie Bell, Joe Bataan, King Khan, David Johansen, John Batiste, Maxine Brown, Young Jessie, Baby Washington, Ural Thomas, and Nick Waterhouse and the Tarots. There will of course also be a dance contest. Also the Soul Clap and Dance-Off is the official 2017 South By Southwest closing party. The remainder of the year finds Toubin and his celebrated party at festivals from Oregon’s Pickathon to the UK’s End Of The Road and in dozens and dozens major North American and European metropolises. He is also doing his hugest ever New York gigs, like the Mermaid Parade where he not only DJs but had had his own NY Night Train float, the Burger Beach Bash also at Coney Island, his own NY Night Train Day at the Seaport Music Festival with The Make-Up, Martin Rev, James Chance and The Contortions, and more, and the 12th Annual NY Night Train Haunted Hop with Shannon and the Clams, Kid Congo and the Pink Monkey Birds, Escape-Ism, and a whole lot more. The New York Night Train is riding stronger than ever.